As you may or may not know, A Discovery of Witches is finally available for streaming in the U.S. Did I pay $5 to get some kind of AMC subscription so that I could watch it? Yes. Any more questions?

I first read A Discovery of Witches about seven years ago. It’s outside my normal realm of interest (read: YA books) but someone (Dee, probably) recommended it and soon after starting I was hooked. Something about the mix of magic and science and alchemy really struck a chord with me. I loved that Diana was an academic who ignored magic. Loved it!

When I first discovered they were making it into a tv series, I was…apprehensive. Honestly, I didn’t think the book lent itself to an on-screen adaptation. And then I saw the first trailer and screamed. Even if I wasn’t familiar with the source material, I would have watched it as soon as possible. The trailers were completely entrancing. They also made me realize that you could focus less on Diana and Matthew and more on the politics of the story and make a really great television show. So I crossed my fingers and held my breath and waited for it to come to the U.S.

We all know the book is normally better than the movie (or show), yes? I can think of a few (VERY FEW) exceptions. Sometime in the middle of the YA Dystopia trend I realized that I should do myself a favor and stop re-reading the book right before I watched the movie. With a general recollection of events and a stronger sense of the impression the book left on me, I found it more enjoyable to watch the adaptation than if I was comparing it to the book, line by line.

So, in anticipation of this month, I haven’t re-read A Discovery of Witches or either of the sequels in a longgggg time. I have vague memories of my favorite things, and I remember how the book made me feel.

And I LOVED the first season. I felt like they did a fantastic job introducing us to the world in a matter of hours. Here were some of my key takeaways (keeping in mind that I haven’t re-read the books in awhile, so some of my specific memories may be flawed).

The book makes it seem like her hair is completely out of control because of the magic she suppresses. Static electricity and stuff. Right?! RIGHT?! As someone with super out of control hair (and a strong desire to be a witch) I always related to that aspect of Diana’s life.

In the opening scene, when I saw Diana rowing, I thought “there is no way this woman’s hair has any idea how to be out of control” and tbh, that didn’t change. A few times, they clearly made an effort to make it seem wild. And I mean, I would rather they cast a good actress who fit the part than pick someone for their hair alone. But it was a slight disappointment.

Speaking of the actress they cast to be Diana, can we talk about her accent?

I was legitimately confused for the first few episodes. I had to double check that Diana is supposed to be American, because I honestly started second guessing that. I remembered that (in the book) she adopted a lot of British tendencies, like drinking tea.

I thought maybe her accent was going to be part of that, and they would talk about how her accent was weird because of the time she had spent in the UK. But it was never addressed, and we’re just supposed to believe that was an American accent. IMDB tells me that Teresa Palmer is Australian, and I guess she sounded like an Australian trying to have an American accent? Again, this is minor. I loved Palmer’s embodiment of Diana and I thought she nailed it. I just also wish someone had coached her a little more on that accent.

Was I the only one looking forward to seeing Diana’s grandmother in the rocking chair?

I really don’t remember the race of most of the characters we encountered in the book, other than being fairly certain the de Clermonts were white. But I was impressed by the diversity on screen.

On that note, let’s talk about Miriam.

As soon as I saw that she was a woman of color, I had a moment of panic. In the book, we originally see Miriam from Diana’s perspective. She’s aloof and resents having to protect Diana. I was afraid the show was going to give us a woman of color whose actions would be interpreted as rude, something similar to an “angry black woman” trope that is racist and disrespectful.

My concerns were unfounded. They completely removed some of the situations that I remembered and focused instead on Miriam being a total badass and super intelligent (characteristics that she has in the book, but that aren’t immediately presented). Miriam was one of the standout stars.

Speaking of badass women…SARAH AND EM!

They didn’t delve into Em’s relationship with Diana’s mother, like, at all, other than a brief reference (Em realizing Diana was spellbound). That was a bit disappointing, since I always loved the additional nuance of Em’s connection with the family. None of the characters got as much screentime as I wanted them to (the hazard of being obsessed with so many characters) but if a genie granted me a wish I would ask for (my student loans to be paid off and) more of these two.

There are far too few homosexual relationships on television. While I feel like the show did a decent job showcasing each woman on her own and in their relationship, I didn’t feel like we got enough. 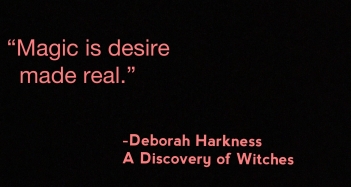 I acknowledge the difficulty of turning a book into a show, especially a book with so many groups that are foreign to the readers. And I think they did a good job showing us the politics that we needed to see to understand the world. But when I think about people I wanted to see more of, not a single man is on that list. And there are definitely men who I think got more than their fair share of screentime, specifically Peter Knox and the vampires on the Congregation.

You know what they didn’t give us? Super badass Ysabeau. They talk her up, they make mention of her as a force to be reckoned with, but in the end, I feel like her character was forgettable. Same with Marthe. I hope that this was a strategic decision that will be rectified in future seasons, but time will tell.

For you TL;DR folks, here’s a recap (with a few extra things)

I was surprised they changed:

Characters we didn’t see enough of:

Characters I was surprised to love:

Characters I would happily have seen less of:

Shadow of Night is by far my favorite book in the trilogy, so I’m beyond excited for season 2.

What I can’t wait to see:

How did you feel about season 1? Love it, hate it? Did you read the book first? Sound off in the comments!

View all posts by M

One thought on “Diana’s Hair Is Not Out Of Control, And Other Surprising Takeaways from “A Discovery of Witches””